Have courage! Be bold! Live brave! From Bible verses to the words on our favorite coffee mug, we’re told to be courageous often. But what we’re not always told is how, exactly, to do that. Where do we learn bravery? Who can teach us how to be bold in the face of fear? How do we figure out how to have courage? Pointing to the Bible for answers and inspiration might seem like a cliché, but the women of the Bible can actually offer us deep meaning and real guidance. Though they lived hundreds of years ago, these women can teach us so much about facing brokenness and hopelessness with courage today. And not just the famous ones!

Do you know the story of Shiprah and Puah? How about Lois and Eunice? Do you know the woman brave enough to stand up to David and his hundreds of soldiers? Though they may not show up on flannel graphs or in VBS songs, these five women had an incredible calling and, even today, can teach us to live courageously despite unusual, difficult, or even frightening circumstances.

Shiprah and Puah were Hebrew midwives, commanded by the evil king of Egypt to kill all of the Hebrew baby boys as soon as they were delivered. But because these women feared God and were certain He had set aside the Israelites for His greater purposes, they listened to the King of the Universe instead of the King of Egypt. Instead of killing the Hebrew children, Shiprah and Puah saved them.

What courage! Their choice was not just dangerous, but life-threatening. Shiprah and Puah risked their own safety to ensure the safety of the Hebrew baby boys. They were willing to lay down their own lives so that others could live—a subtle foreshadowing of the coming Christ, who truly did lay down His life so that many who were headed toward death could live instead.

Shiprah and Puah’s belief in their God and their mission – and the support they received from one another – gave them strength. These women were stronger together, knowing that they could support each other in their task of saving the Hebrew boys. Together, they honored the Lord by their regard for human life. Together, they saved a generation of Israelites and gave hope to a frightened, oppressed people.

When the Apostle Paul wrote to Timothy, his protégé and partner in ministry, encouraging him in his faith and in his ministry, the first thing he mentioned was Timothy’s upbringing. In his efforts to bolster Timothy’s resolve to spread the gospel and shepherd the church, Paul appealed to Timothy’s family legacy of belief. While Paul seemed to view Timothy as his spiritual son, he also acknowledged the great impact Timothy’s mother, Eunice, and grandmother, Lois, had in his life.

As Paul mentions later, Lois and Eunice taught Timothy “the sacred Scriptures” (2 Timothy 3:14-15) – something he needed to lean on while in the trenches of ministry in the early church. When Paul first encountered Timothy, he recognized quickly how solid his faith was and how deep his spiritual knowledge ran. In more than one place in the Bible, Paul notes that this was a direct result of Timothy’s mom and grandma teaching him. Clearly, he respected the way Lois and Eunice taught Timothy, both in word and deed, creating in him a strong foundation upon which God was able to build a ministry that had incredible, lasting effects.

Lois and Eunice may not have led hundreds of people to the Lord. They may not have died for their faith or shared it in a stadium full of people. All we know for sure is that they taught Timothy, their grandson and son, to know and fear the Lord. They were known for their sincere faith, which affected Timothy at a young age, and in turn, influenced the spread of the gospel throughout the first century.

Timothy traveled with Paul throughout the Roman world, sharing the gospel of Jesus Christ. The daily faithfulness of Lois and Eunice to teach Timothy the Scriptures and model genuine faith in front of him influenced many more people than Timothy. Lois and Eunice embraced their spiritual commitment to their son and grandson, and their daily leadership and example allowed many to come to faith in Christ as Timothy walked out the faith they had passed down to him.

Abigail was the wife of a wicked man, Nabal. He was quick-tempered and foolish and treated everyone harshly. When David’s men asked Nabal for provisions, he turned them down, despite the kindness that David’s men had shown him. Hearing of this, Abigail took action. She knew her husband was foolish and that David’s wrath was coming on her household. She gathered a great many gifts and brought them to David, asking for his forgiveness for her husband’s actions.

Not only was Abigail courageous, but she also was wise. When she approached David, bearing provisions and gifts, she knelt in respect and begged his forgiveness. She took responsibility for her husband’s offensive response to David’s men, noting that she had not been home when they came to ask for help. Her actions made clear the difference between Nabal, selfish and worthless, and herself, intelligent and helpful. She also appealed to David’s desire for righteousness by pointing out that by avoiding a battle and bloodshed, his conscience would be clear.

What would you do if those around you insisted on selfish, harmful behavior? What if those in your family or community consistently chose to ignore God’s commands, acted in their best interests regardless of consequences, and hurt others on a regular basis? How would you atone for their sins, prevent escalation or retaliation? Would you be bold and stand up for what’s right? Would you disregard the opinion of others or even potential threats to your reputation or well-being in order to protect those whom God loves? Would any of us follow Abigail’s example of courageous kindness?

Abigail took incredible risks by offering help to David. She risked her husband’s wrath by giving away their family’s food and supplies, and she risked punishment from David simply by being associated with Nabal. Still, Abigail knew it was up to her to prevent a devastating battle between the two men and so she acted. Rather than fleeing or trying to change her husband’s horrible character in a just moment’s time, Abigail stepped out in courage and dealt with the problem with her own good and discerning character. She knew that blessing David and his men was the right thing to do, and she did it, without worrying about the repercussions from her foolish husband. Her bravery led her to bless others and save her household, and eventually, become David’s wife.

You may have forgotten these women of the Bible (or perhaps you’ve never heard of them before now), but putting yourself in their sandals will allow you to walk through the hardest days with the courage you need to lead, to love, to trust, and to turn to God in every situation. And their stories can show you exactly how to be brave when you don’t know how and to lean into the strength of the Lord when your own isn’t enough.

Pick up a copy of Women of Courage: A 40-Day Devotional on Amazon, LifeWay.com, or anywhere books are sold. 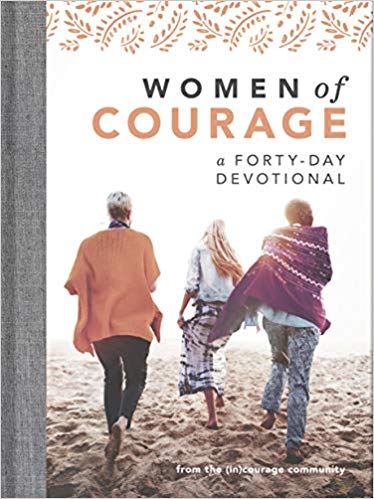 Mary Carver is a writer, speaker, and recovering perfectionist. She lives for good books, spicy queso, and television marathons, but she lives because of God’s grace. Mary writes with humor and honesty about giving up on perfect and finding truth in unexpected places on her blog, MaryCarver.com. She is the co-author of Choose Joy: Finding Hope & Purpose When Life Hurts, as well as a regular contributor to (in)courageand MomAdvice.com. Mary and her husband live in Kansas City with their two daughters.

This content first appeared on Crosswalk.com and is used here with permission. To view the original visit: https://www.crosswalk.com/faith/women/courageous-women-from-the-bible-you-may-have-forgotten.html

I think my problem with stuckness has a lot to do with communication.