Gideon: A Fearful Man with a Mighty Mission
by Jennifer Waddle

“O my Lord, how can I save Israel? Indeed my clan is the weakest in Manasseh, and I am the least in my father’s house.” Judges 6:15

It was during a period of great famine and impoverishment, that a man named Gideon was chosen to deliver Israel from the bondage of other nations. The Midianites, Amalekites, and others from the east had forced Israel into the mountains to make their dwellings in dens and caves. Any livestock or produce that Israel gained was quickly destroyed. Therefore, when Gideon was found secretly threshing wheat in a winepress, it was probably because he had no other choice. 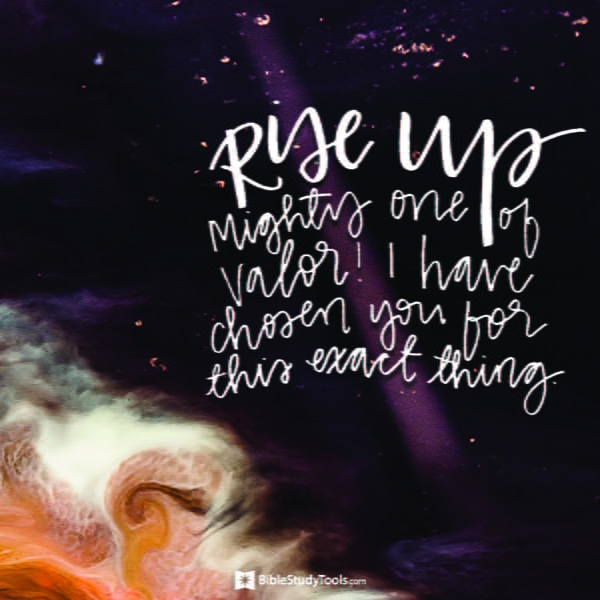 And the Angel of the Lord appeared to him, and said to him, “The Lord is with you, you mighty man of valor!” Judges 6:12

The title given to Gideon, mighty man of valor, didn’t seem to line up with Gideon’s perception.There he was, hiding in a winepress, trying to survive, and God was addressing him as a “mighty man of valor.” (with an exclamation!)

Gideon, along with the rest of Israel, was oppressed, fearful, and nearly defeated. So, to be called a mighty man of valor just didn’t resonate.

O my lord, if the Lord is with us, why then has all this happened to us? And where are all His miracles which our fathers told us about, saying, ‘Did not the Lord bring us up from Egypt?’ Judges 6:13

On and on, in Judges chapter six, Gideon questioned, doubted, and inquired of God in fear.

It was as if he couldn’t wrap his mind around the fact that God, the Creator of the universe, was choosing and equipping him to do a mighty thing for His people.

What mighty calling from the Lord do we struggle with most? What list of weaknesses do we make for ourselves; weaknesses that we believe invalidate us from serving God in a mighty way? What arguments do we make with the Lord when He calls us to step out of the comfort zone of our “winepresses?”

God often uses the weak, the fearful, the ill-equipped. In fact, it is in our very weaknesses that He is strong! It is in our fearfulness that He proves Himself more than able. And, it is in our lack that He equips us to do exactly what He’s called us to do.

I suggest making a list of every weakness you can think of. Write it down. Present it to the Lord. Then, wait in wonderful expectation for Him to take those weaknesses and say, “Rise up, mighty one of valor. I have chosen you for this exact thing.”

Jennifer Waddle considers herself a Kansas girl, married to a Colorado hunk, with a heart to encourage women everywhere. She is the author of several books, including Prayer WORRIER: Turning Every Worry into Powerful Prayer, and is a regular contributor for LifeWay, Crosswalk, and Abide. Jennifer’s online ministry is EncouragementMama.com, where you can find her books and sign up for her blog, “Discouragement Doesn’t Win.” She resides with her family near the foothills of the Rocky Mountains—her favorite place on earth.

Want more Your Daily Bible Verse? We also have a podcast! This podcast features different verses than the written devotional you just read, but carries the same commitment to a closer look at Scripture each day. You can find out more by clicking the link below!

This content first appeared on Crosswalk.com and is used here with permission. To view the original visit: https://www.crosswalk.com/devotionals/your-daily-bible-verse/gideon-a-fearful-man-with-a-mighty-mission-bible-study-minute-march-6-2018.html